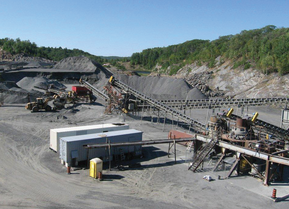 Aggregate materials such as landscaping stones, gravel, sand, granite, and limestone are used in a wide variety of projects, from home landscaping to highway construction. Core materials are extracted from quarries and processed into different shapes and sizes using rock-crushing equipment and other heavy machinery in open-pit mining operations. One company specializing in aggregate materials is Fowler Construction of Ontario, Canada, with more than 5,000 acres of aggregate resources including granite and limestone quarries as well as natural gravel properties. The 60-year-old company has five aggregate plants located throughout northern Ontario and is one of the largest employers in the scenic Muskoka region.

Rather than using permanently installed equipment and machinery at each plant, Fowler takes a more efficient approach to aggregate processing by moving a portable rock-crushing plant from one location to the next. All of the plants are run using a portable generator tethered to a control trailer by a power cable roughly 100-ft long. Every month or two, the entire operation is packed onto trucks and moved to the next location. However, one of the challenges with this setup stems from the cable itself: The four-conductor, 500 MCM G-GC cable is extremely heavy and requires several strong employees and a piece of equipment to move it onto the truck. Even a 10-ft length of this 3-in. diameter cable weighs hundreds of pounds, making it very difficult for workers to handle and wasting hours of valuable work time. Besides the weight issue, the G-GC cable also requires an electrician to access the control cabinets of both the generator and the control trailer and bolt the cable into both areas.

Andy Chiniborch, maintenance electrician at Fowler Construction, knew there had to be a better cabling solution and started exploring some different options. He was familiar with cable supplier Lapp Group and contacted his Lapp Sales representative Randolph Froude for cable design assistance. Together Randolph and Andy came up with complete cable assembly designs to meet the specific application requirements. Lapp Systems provided the complete assembled cable solution to satisfy Fowlers time and Labor cost needs.

“We wanted to replace what we call the ‘giant anaconda’ cable with something more lightweight, easier to handle, and that doesn’t require an electrician to connect it,” says Chiniborch.

“Besides that, I didn’t want to have to design and assemble it myself. I wanted a plug-and-play solution ready to go that I didn’t have to spend hours of engineering time developing in-house.”

Lapp’s engineering team Both Andy and Randolph designed a new cable assembly that addresses the issues of size, weight, and ease of connection. Rather than using one heavy four-conductor G-GC cable, they specified four separate one-conductor DLO cables instead. DLO cable, or diesel locomotive cable, is a single conductor, flexible copper cable well suited for open-pit mining and approved by the Mine Safety and Health Administration (MSHA). To make the complete cable assembly easier to use, they also installed inline Leviton Cam-Lock connectors onto each end of the four 100-ft cable runs. These cable and connector assemblies — all color-coded — quickly and easily connect to short cable tails coming out of the generator and control trailer.

“We now have color-coded 3-foot tails coming from the generator, and 6-foot tails coming from the control trailer, for each of the four cable runs. We no longer need an electrician to bolt cables into control cabinets. Any worker on hand can simply twist the connectors 180° to lock them into place. The guys are much happier with the lightweight cables that require only one person to setup and dismantle in a fraction of the time spent wrangling with the giant anaconda,” says Chiniborch.

Many companies delay new projects indefinitely because they either lack in-house resources for concept design and development, or their existing engineering staff is too busy handling its current workload. One way to overcome these obstacles is to connect with a supplier’s systems engineering team who can develop a turnkey solution for the application at hand.

For example, Lapp knowledgeable sales personnel along with Lapp Systems, a division of Lapp Group, has a team of engineers who work with companies from the initial design concept through prototyping, production, and testing. The company has a UL and CSA recognized onsite facility, as well as offsite assembly resources, to tackle projects of any size. Lapp Systems provides assistance with the design and assembly of servo and motor drive cables, wire harnesses, junction and control panels, control panel remote access ports, populated cable track assemblies, switch and emergency stop boxes, and non-standard industrial connector and harness products for special applications.