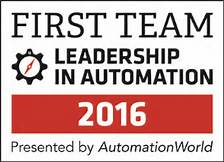 Over two dozen categories are featured, representing the wide variety of automation technologies, software and products in use by today’s manufacturing professionals across the discrete, batch and continuous process manufacturing industries.

Lapp Group was awarded a place on the 2016 First Team in the following categories:

Jim Chrzan, Publisher of Automation World, shares his enthusiasm. “Our First Team Honorees represent not only best-in-class product innovation but also superior customer service. Congratulations to the honorees! And thank you to the end-users who took the time to vote for their favorite solution providers.” Leadership in Automation First Team Honorees will be recognized in Automation World’s  January 2017 issue, available here: